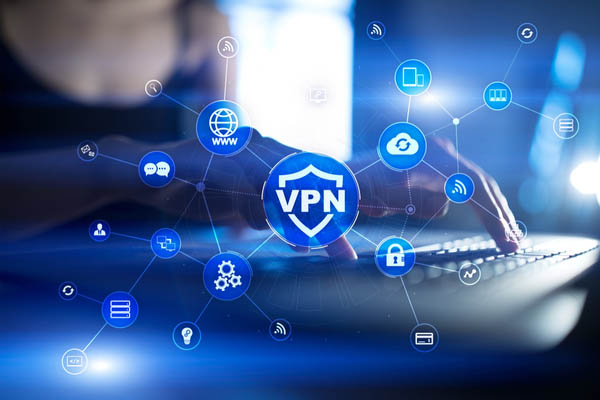 The main reason VPNs are used around the world is to see things that are blocked on the internet in a region. Some countries like China, Egypt, Saudi Arabia, Vietnam and Pakistan have state-sanctioned firewalls that block newspapers and other websites.

Even if you live in a comparatively free nation, archaic broadcasting laws that mandate licenses for each region can geo-block you from watching some shows. These old fashioned laws are why UK, US and Japanese Netflix are all different. They don’t make much sense in the era of the information superhighway.

VPNs route your traffic through a server in the country that you’d like to browse from. Instead of all your traffic following a path that leads to the end destination it makes a stop first at your VPN.

Once the VPN receives the traffic it then forwards it on to the final destination. By first sending the traffic to the VPN, you break the link between the sender and recipient.

A VPN creates a tunnel through the public internet and it also encrypts all the traffic that’s leaving your computer.

5 Ways A VPN Protects You Online

Most of the internet is already encrypted.

Any time you see a padlock in the URL bar, it means encryption is used and your data is going to the server you’ve requested and there’s no chance it’s been intercepted. When you log into your internet banking and cryptocurrency exchanges, this encryption protects you.

2. Protects you on Public WiFI

WiFi is normally encrypted and secure, but it doesn’t have to be. You have no control over who set up the public WiFi at your local cafe or coworking shop. And no way to know if a hacker hasn’t reconfigured it since. There’s a chance that your data could be intercepted between your computer and the WiFi router. A VPN encrypts all the traffic before it leaves your computer so this is no longer something that you need to worry about.

3. Hide what you’re doing online from your ISP

With a VPN your internet service provider is unable to see the websites that you visit. They can see that you are using a VPN, that’s all they know. If you are concerned about the growing data collection practices of ISPs normally at the instruction of governments of VPN is a way to browse the internet stream and download movies confident that no one will ever know what you’re doing. This isn’t just a concern for criminals, when you are trusting an ISP to keep records you are also trusting them to secure those records and prevent them from being hacked. If there’s a record of all the sites you visit and your username and password have been exposed there’s a greater chance other accounts will be exposed too.

4. Prevent your ISP from throttling your internet

Some isps will detect the type of traffic that originates at your computer, if they can tell that it’s torrenting traffic and something like 40% of traffic online is torrenting traffic, then your ISP May throttle or slow down your internet. As a business, this is in their best interest. they don’t want power users to congest the network with heavy use. As a customer, if you pay for a service you should be able to use it however you want. A VPN is a way to disguise if you are torrenting or not. Which reduces the chance that you will be throttled.

When you torrent files everyone can see your public-facing IP address the same as you can see everyone else’s. The problem with this is rights holders monitor who is downloading popular torrents and reach out to ISPs to forward cease and desist notices to you. This doesn’t happen very often, but when it does it’s a real pain. Rightsholders will pressure you into paying a commercial price for that film or show and can even threaten you with legal action should you refuse to pay. If you receive one of these emails the best strategy is to ignore it completely. Alternatively, you can get a VPN before it becomes an issue and never need to worry about it again.

1 Way A VPN Won’t Protect You

Despite what the army of paid shills would have you believe, the way companies track people online is much more complicated than simply monitoring IP addresses. Third-party cookies place little snippets of code inside your browser when you log in to Facebook or Instagram or Snapchat or a million other sites. Then when another site uses any Facebook code like a share button this also loads code to retrieve the third party cookie from your browser and see where else you’ve been online. You see no one can read anyone else’s cookies they can only read their own. So Facebook plants its own cookie for later retrieval.

This is why some VPNs like SurfShark bundle ad blockers with their service. Read this SurfShark review to learn more.

Let’s Wrap This Up

A VPN is a valuable tool for maintaining your online privacy and security. They hide your IP address and what you’re doing online from your ISP and the site you are visiting. Remember online piracy isn’t something only criminals need to worry about. By trusting your ISP to keep records, you’re also trusting them to keep those records safe. Not to mention a lot of this history could exist forever. While the risks are small with a VPN they don’t exist and considering that they only cost a few dollars a month it’s worthwhile, wouldn’t you say?